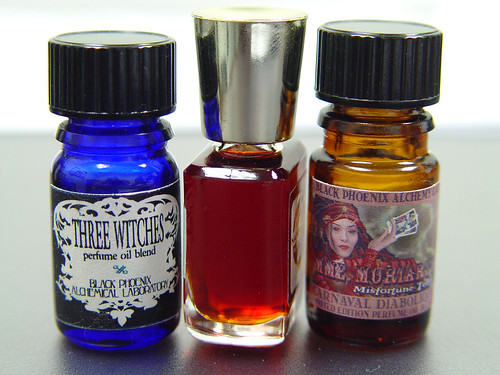 Lily's Embrace by *perselus on deviantART 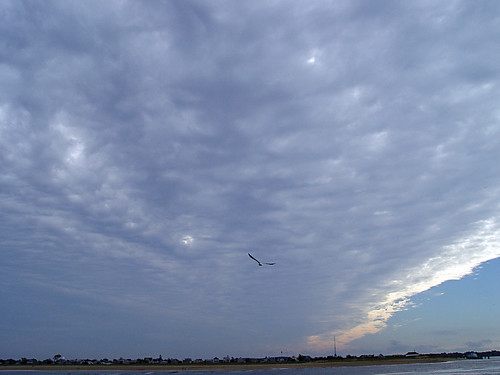 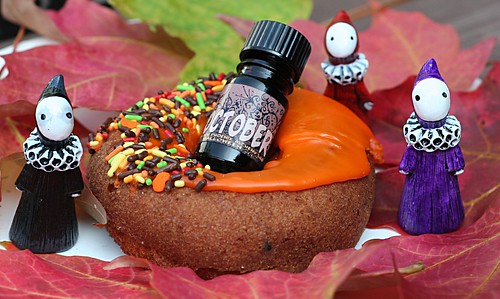 Happy October, everyone!
It's been seven months since I last posted here! Um...slacker?
As for BPAL, well, my latest order, received 9/17/07, included these:
- The Lurid Library: Ahhhh, incense-y, smoky, with the scent of old parchment...love it!
- All Souls: Interesting, but I'm not in love with it
- October: WANTED to love it, but didn't like this at first...after it had been on an hour, MAYBE...sigh...
- Samhain: LOVED at first snif, a bit mulled winey, cinnamon, cloves, YUM!

Frimps:
- Black Phoenix! I've been dying (hehehe) to snif this and weirdly it reminds me of my mother
- Whitechapel - very lemony and flowery (actually, the flower is lilac, my fav) and strangely, I've been leaning toward scents like this lately. I bought some shower gel from Fresh, Mangosteen, and love it.
- Umbra
- Tintagel
- Zombi
- Swank
- Debauchery
- Casanova 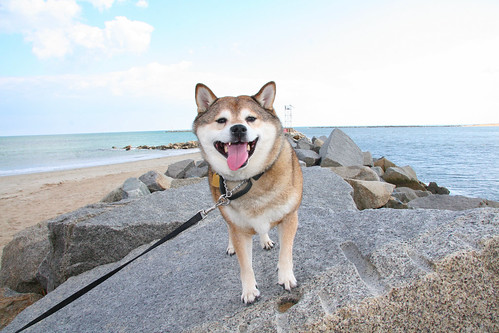 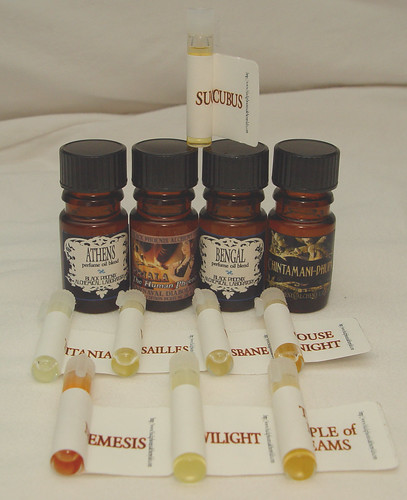 My day was made when I received a package from BPAL! Inside were four 5 ml bottles and eight frimps! Oh, I was in heaven!
I tried Priala and Chintamani-Dhupa; liked Priala alot, but ... Chintamani-Dhupa was a bit of a disappointment. I'll probably sell this bottle. Athens and Bengal I'd tried before and loved.
Succubus I'd been wanting to try, so I was thrill it was in there. Didn't do it for me, tho...

Bengal:
A sultry and unruly blend that emulates the ambient scent of the markets in ancient Bengal: skin musk with honey, peppers, clove, cinnamon bark and ginger. From the General Catalogue / Wanderlust.

Priala, The Human Phoenix:
"As you come to the final stage, you see a spotlight focused upon a large pile of pitch-black ashes on the center of the floor. A parchment scroll has been tacked to the foot of the stage. It reads:
Now I will believe That there are unicorns; that in Arabia There is one tree, the phoenix’ throne; one phoenix At this hour reigning there.
You catch a whiff of burnt cinnamon, and a whirlwind begins to form within the center of the cold pyre. The ashes rise, condense, and coalesce into the dusky form of a woman. She shakes her body gently, tossing her hair, and the ashes fall from her skin. She is perfect, radiant: not a single cinder mars the flawlessness of her countenance. Her body seems to cast a shadow shaped like a triumphant bird, wings outstretched, onto the blank taupe canvas behind her. Her eyes are closed, and her head is bowed; her expressionless face is enigmatic. Her dark eyes begin to glow, and her mouth turns up in a secretive, intimate smile. She throws back her head and extends her arms, and suddenly the scent of smoldering myrrh assails you. Within moments, the woman explodes into flame, and you see that her face is now a vision of passionate ecstasy. The turbulence of the conflagration whips around her violently, and gouts of flame burst from her body, igniting the canvas behind her. She raises her arms in exultation, and through the flames, you see both the outline of her scorched black skeleton and the shadow of the phoenix triumphant.
Three deep, dark myrrhs, smoke, and cinnamon bark." From the Limited Edition Carnaval Diabolique: Act III

Nemesis:
The whip-wielding Goddess of Divine Retribution, Justice and Vengeance, and is the force that balances the scales of Tyche's fortune. She is also called Adrasteia, 'she whom none can escape', and Erinys, 'implacable'. Nemesis is the executrix of Olympian justice, and her primary duty is to punish hubris and mankind's offenses against the natural order with inflexible, remorseless and raging fury. Her symbols are a sword and scourge, a measuring rod and scales. Cypress, ginger, fig, dried rose, red patchouli, tonka bean and cyclamen. From the General Catalogue / Excolo.

Twilight:
An enigmatic, otherworldly scent, brimming with power and mystery. Lavender and jasmine, with a touch of glowing honeysuckle. From the General Catalogue / Funeral Oils

Succubus:
Bat-winged, flame-eyed, and possessed of an unearthly, perfect beauty: the Daughters of Lilith, the Succubi, invade the dreams of men and lie with them in rapturous, unholy sexual union. The scent of their skin is bittersweet, dusky and terminally seductive. Mimosa, orange blossom, neroli and bergamot with a drop of sweet clove. From the General Catalogue / Love Potions

Wolfsbane:
Notorious for its properties for protection against werewolves and curing lycanthropy, this nefarious plant also has a fine history of use as a virulent poison. Clasically, Medea employed it in her many works of vengeance. This concoction of ours has none of the lethal qualities, but still personifies all of the herb's dark history beautifully. From the General Catalogue / Rappaccini's Garden.

Temple of Dreams: Dream Formula III. For use when working with the many Gods of Sleep, Dreams, and Nightmares. From the General Catalogue / Somnium

Versailles:
Grand, courtly and robust: a glittering, golden scent that would do Louis XIV proud. Gilded red and gold citrus with amber, ruby roses, jasmine and orris. From the General Catalogue / Wanderlust.

Titiana:
Pastel fruits drenched in morning dew - the white grape, white peach, and pale yellow pear are gorgeous and delicately sweet.
The petals are blended so well that a single note is hard to identify, although the sweet pea seems to be the most prominent, and the dew figures prominently into this scent - it really sparkles in an aquatic, dripping, and slightly breezy way. In the end ... actually, from about the first thirty seconds on ... Titania is one of the most "melded" scents I've tried; the individual notes are almost indistinguishable, and the nature of the scent is complete and otherworldly. Titania is a hidden garden grove of common fruits and flowers, but so much better than the "everyday" that they seem unreal in their perfection. Glittering with moisture graced to them by a presence you can't quite comprehend, the fruit and petals are at the single instant of being exactly ripe and full-blown, and you're stumbling across a moment of perfection that wasn't meant for we lesser mortals. Light, intense, and ethereal. A nocturnal bounty of fae dew-kissed petals and pale fruits: white grape, white peach, iced pear, musk rose, sweet pea, moonflower and snapdragon. From the Illyria.

House of Night:
"And by that light around the dome appear'd
A mournful garden of autumnal hue,
Its lately pleasing flowers all drooping stood
Amidst high weeds that rank in plenty grew.

No pleasant fruit or blossoms gaily smil'd,
Nought but unhappy plants or trees were seen,
The yew, the myrtle, and the church-yard elm,
The cypress, with its melancholy green.

There cedars dark, the osier, and the pine,
Shorn tamarisks, and weeping willows grew,
The poplar tall, the lotos, and the lime,
And Pyracantha did her leaves renew.

The poppy there, companion to repose,
Display'd her blossoms that began to fall,
And here the purple amaranthus rose
With mint strong-scented, for the funeral.

And here and there with laurel shrubs between
A tombstone lay, inscrib'd with stains of woe,
And stanzas sad, throughout the dismal green,
Lamented for the dead that slept below. 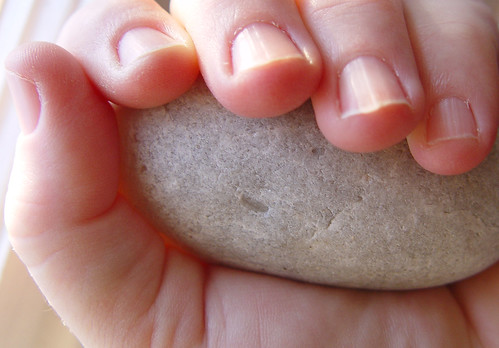 I love the way this stone feels in my hand...it fits in my palm perfectly. I found it on a beach in Gloucester, MA.

I ordered 4 5ml bottles from Black Phoenix recently; the first two I love and the
second two I'm hoping I love!

Bengal: skin musk with honey, peppers, clove, cinnamon bark and ginger.
Athens: voluptuous myrrh, golden honey, red wine, and sweet flowers.
Chintamani-Dhupa: After reading the reviews, sounds like it basically smells like
sandalwood and honey...yum!
Priala: the Human Phoenix: Three deep, dark myrrhs, smoke and
cinnamon bark. Sounds smokey and spicy, just what I like. And the phoenix ties in
with my tattoo! 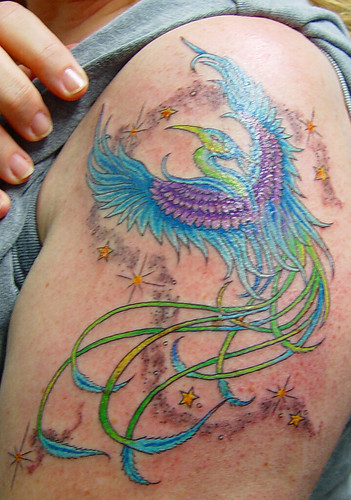 I'm finding I really love things with clove in them, or honey, or red wine.

What are your favorites, and what are you hoping to love? 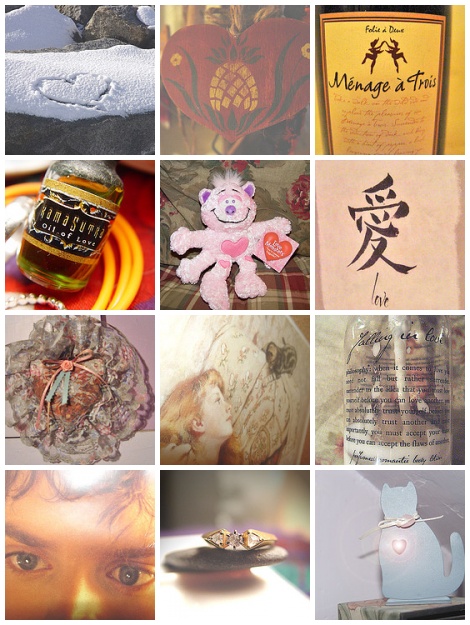 Doesn't matter if you're single, married, or somewhere in between. You are loved by someone! 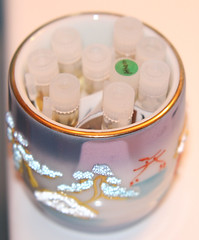 Came home last night to find I'd gotten nine BPAL Imps in the mail! I'd ordered 6 from someone on the message board; she included 3 extras :-)

I put this on last night before I went to bed in hopes of dreaming of a certain pirate captain...but no such luck!

I don't normally like floral scents, but this one smells SO good to me...must be on the dark side ;-). I'm wore it to work today and it reminds me of flowers tucked into a book to dry but that are still faintly fragrant.

Silk road: This is like a light, spicy incense; slightly woody, cinnamon, possibly a hint of clove, a touch of ginger, dried grassy. As Northernminx said: "the silk covered interior of a wagon train from the east where the spices and dust and cool shadows are protecting you from the scorching sun outside."

I put this on when I got home and all I can say is WOW! It's my favorite BPAL scent so far...spicy, but not in a powdery way.

These are the extras:

Shambhala by Arcana, from Magical Omaha: Sandalwood, Himalayan cedarwood and a dash of spun honey.